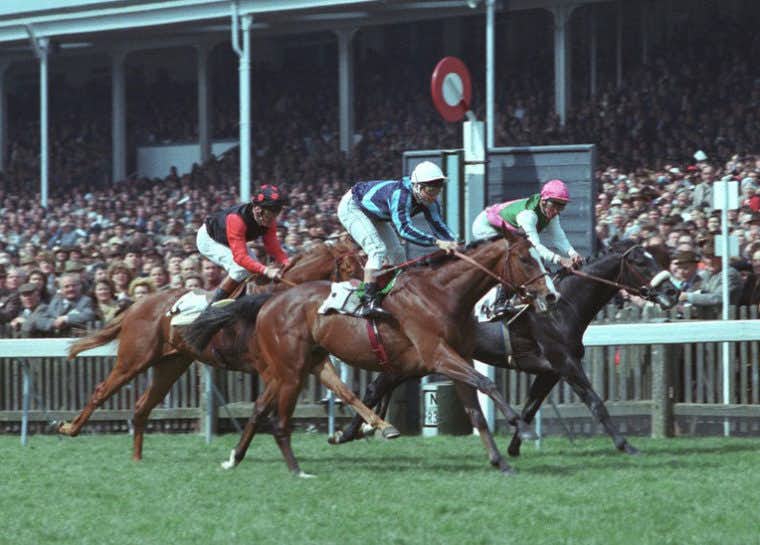 Known Fact won the Gr.1 2000 Guineas after the disqualification of Nureyev © John Crofts

The In Reality colt out of Tamerett was bought for $225,000 at the Keeneland Yearling Sales in July 1978. Humphrey Cottrill acted as purchaser on behalf of Prince Khalid, who the year before had first entered the horseracing scene by buying three yearlings at Newmarket.

Named Known Fact, the colt was sent into training with Jeremy Tree at his historic Beckhampton training yard. He raced four times as a two-year-old, winning on debut in well-behaved fashion, but then placing twice when letting his natural exuberance get the better of him and pulling too hard. He settled better in the Gr.1 Middle Park Stakes at Newmarket, winning well and prompting jockey Willie Carson to profess that the colt would win next season’s Gr.1 2000 Guineas. The win represented a first Group 1 win for Prince Khalid.

Known Fact opened 1980 with a prep run in the Gr.3 Greenham Stakes, where he finished fourth. It was then onto Newmarket for the first Classic of the season, with Known Fact’s preparation far from ideal due to a virus at home. Known Fact enjoyed a trouble-free running, but it was the favourite Nureyev who passed the post in front by a nose. The Stewards however were not happy with what they saw – Nureyev having to barge his way through the field to the line. They therefore awarded the race to Known Fact, who became his owner’s first Classic winner.

The colt was found to be suffering with bronchitis after Newmarket, and thus missed the Gr.1 Derby. His racecourse reappearance in August resulted in a fifth place in the Gr.1 Prix Jacques le Marois, but was thereafter followed by a hat-trick of victories – in the Gr.2 Waterford Crystal Mile, Listed Kiveton Park Steel Stakes and Gr.2 Queen Elizabeth Stakes. The latter race proved to be an epic battle with the Champion Miler of 1979, Kris, with Known Fact prevailing by a neck. Known Fact was subsequently pronounced the Champion Miler of 1980.

At the start of 1981, everyone was excited by the prospect of Known Fact’s return. Unfortunately, he was slow to come to hand, and after a disappointing return at Haydock in May, the colt was retired. He had been well-loved at Beckhampton, famed for his good nature and allowing a black cat to sleep on his back at night.

Known Fact stood his first season at stud at Juddmonte Farms in Wargrave – which had been purchased by Prince Khalid the previous summer for the purpose of standing him as a stallion. He spent four seasons at Wargrave and two further years at Whitsbury Manor Stud, before shipping to Juddmonte Farms in Kentucky.

Known Fact was to make one further notable contribution to Juddmonte history as the sire of Warning (out of foundation mare Slightly Dangerous), who went on to become Prince Khalid’s first homebred Group 1 winner. He sired four Group 1 winners in total, and died at aged 23 at Juddmonte USA, where he is buried.

Winner of 6 races from 2 to 3 years including: