Obligatory is dynamite in the Gr.1 Distaff Stakes

Favored Just One Time (Not This Time), a last-out winner of Keeneland's Gr.1 Madison S., showed the way through fractions of :22.36 and :44.95 and hit the quarter pole as the one to catch. Obligatory, meanwhile, last of seven throughout, tipped out six wide beneath Jose Ortiz for the stretch run. Longshot FourGraces (Majesticperfection) took over from the pacesetter in deep stretch, but couldn't withstand the streaking gray, who came rolling over the top to get up by 3/4 of a length. It was another 2 1/2 lengths back to Just One Time in third. "The only thing I reminded Jose [Ortiz] about beforehand was something he knew: her stretch run is her weapon," Hall of Fame trainer Bill Mott said.  "The goal with a filly like this is to get her a Grade 1. She loves Churchill; for whatever reason she just really does well at this track. She's won a Grade 2 and a Grade 3 here, so we pointed for this race to get her her Grade 1. Glad she got it."
A 16-1 upset winner from out of the clouds in the Gr.2 Eight Belles S. on the Gr.1 Kentucky Oaks undercard last year, Obligatory's sophomore campaign also included second-place finishes in the Gr.1 Acorn S. June 5 and Gr.1 Cotillion S. Sept. 25. She entered the Derby City Distaff riding a two-race winning streak, capturing the Gr.3 Chilukki S. in her season finale beneath the Twin Spires Nov. 20 and the Gr.3 Hurricane Bertie S. at Gulfstream Mar. 12. She is now three-for-three at Churchill Downs. 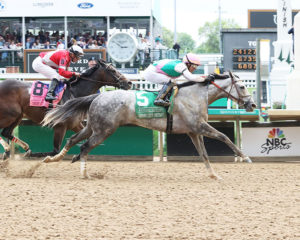 "She's a very nice mare," said Ortiz, who also won the Gr.2 Pat Day Mile earlier on the card. "I feel like she's getting better and better. I just waited and let her get into her own rhythm. They were going very fast on the front end. I was sitting at the back of the pack. I didn't want to sweep her off her feet to get a good finish. I was very happy with the trip I had. I swung a little wide because I felt like I had enough [horse]."