The third session of the Tattersalls Autumn Horses in Training Sale continued the remarkable momentum of the second with exceptional trade resulting in turnover in excess of 10 million guineas, breaking the record aggregate for the sale.

The Juddmonte draft is a customary highlight of the Tattersalls Autumn Horses in Training Sale and it provided the top lot on the third day of this year’s renewal when BOLTAWAY was knocked down to Najd Stud and Peter & Ross Doyle for 400,000 guineas.

The three-year-old DUBAWI colt is out of the four-time Grade 1 winning mare PROVISO and has shown smart form himself with four wins from six starts for Roger Charlton this season, earning a ‘Timeform’ rating of 100.

"We tried to buy this horse privately but that wasn't possible and so we waited for this sale. It's proved to be one of the toughest markets I have ever seen for horses in training. He's by Dubawi, whose offspring have succeeded in Saudi Arabia and out of a Dansili mare, and Dansilis have done very well in Saudi Arabia so he had the right pedigree. He also had size and good feet for racing on dirt.

"He has not been over-raced and he vetted 100 percent, which was one of the main reasons for trying to buy him. All the races in Saudi Arabia are on the up, with better prize money sometimes increased by four or five times. There are races for locally-bred horses and imported horses, and while we don't have many imported horses the ones we have are very good." 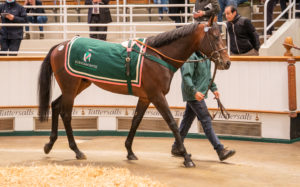 Najd Stud had found themselves in the unfamiliar position of underbidders one lot earlier when OLD FLAME, the first of the Juddmonte Farms draft to be offered at the Tattersalls Autumn Horses in Training Sale, was bought by the Sydney-based Snowden Racing and Will Johnson Bloodstock for 250,000 guineas.

Colum McCullagh, Snowden Racing's Racing and Bloodstock Manager, took time out from morning track work to discuss the purchase of the three-year-old son of INVINCIBLE SPIRIT:

"He will be on the first shipment from Europe to Australia. He looks to have the right sort of profile for Australia and is by Invincible Spirit, who has such a huge influence here through his son I Am Invincible.

"He should suit a lot of races here over distances from 6 furlongs to a mile, he is a real-sprinter miler type. He has not been bought for a particular client and we will look to syndicate him."

McCullagh added: "He came highly recommended by his trainer, who loved him every morning and evening. I have to give special mention to Will Johnson, who spent time in Newmarket as assistant to trainer Roger Varian. Will has put a lot of work into the catalogue and it is great to have someone with his knowledge of racing in the region.

"To have a horse from such an organisation as Juddmonte Farms speaks for itself – Old Flame has just two dams on the page and has a stallion's pedigree."

Formerly trained by Ralph Beckett, OLD FLAME has won two of his four starts and was offered with a ‘Timeform’ rating of 100p. His dam LILYFIRE is a half-sister to TANTINA, the dam of Group 1 winner CITYSCAPE and BATED BREATH and the grandam of St Leger winner LOGICIAN.