Artorius - TDN's promising maiden to keep on your radar

In this continuing series, TDN's Senior Editor Steve Sherack catches up with the connections of Juddmonte's Artorius.

After blitzing home to finish a strong second on debut at Keeneland, Juddmonte homebred Artorius (c, 3, Arrogate--Paulassilverlining, by Ghostzapper) could make his next start during the upcoming Gr.1 Belmont St. Racing Festival.
"That was maybe a bit short for him and there's a race on June 10th going a one-turn mile at Belmont," Juddmonte USA General Manager Garrett O'Rourke said. "Everything is going well with the colt. We'll keep our fingers crossed and hopefully he continues to progress. He's a good-looking horse." Off as the 3-1 second choice in his unveiling for Chad Brown going six furlongs in Lexington Apr. 16 (video), Artorius was away in good order from stall three and was immediately under a ride in eighth through an opening quarter in a sharp :22.13.
Still with plenty to do rounding the far turn, the dark bay was taken widest of all as they straightened, and despite switching to his left lead approaching the final sixteenth, came flying home on the outside in :12.07 to finish 1 1/2 lengths behind 'TDN Rising Star' Under Oath (Speightstown). Artorius earned an 83 Beyer Speed Figure for the effort.

"He just had a few issues early on as a 2-year-old, so we brought him home and let him grow up a bit," O'Rourke said. "We brought him back and he's been a different horse altogether. Chad kept saying that he had turned the corner and that he really liked him going into his debut. He obviously came across a good horse [Under Oath] who had first run on him. But, oh God, we loved the way he came home--the final eighth, especially."
Juddmonte purchased Artorius's dam Paulassilverlining privately from breeder Vince Scuderi ahead of her 5-year-old season with the gone-to-soon Arrogate in mind as a future mate. She recorded two wins at the highest level that term--the Gr.1 Madison S. and Gr.1 Humana Distaff St. while carrying Juddmonte's green-and-pink silks. Paulassilverlining, a half-sister to two-time Gr.1 Carter H. winner Dads Caps (Discreet Cat), is also responsible for the 2-year-old filly Parameter (Into Mischief) and a Tapit filly of this year. Parameter recently joined Brown's Saratoga string, according to O'Rourke. 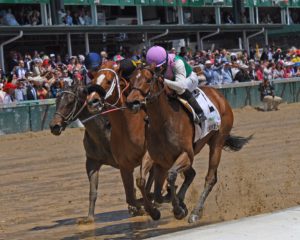 The brilliant Gr.1 Breeders' Cup Classic and Gr.1 Dubai World Cup hero Arrogate, the richest North American racehorse in history, was humanely euthanized at Juddmonte after suffering from an undetermined illness in June 2020. He is currently represented by 27 winners, headed by Gr.1 Kentucky Oaks heroine Secret Oath.
"There will certainly be an added sweetness--we'd love to have a good Arrogate," O'Rourke concluded. "And most especially, also get a good start to Paulassilverlining's broodmare career as well. He definitely has talent, it's just a matter of how much."